Discover all the events not to miss ›

The farm is located within the province of Ancona, the capital of the Marche region. Ancona's port is where the history of this city begins. From the port travel to the Republic Square in the heart of the cultural life of the city where you can also see the Theatre delle Muse, created in 1826 by architect Ghinelli. Walking up Via Gramsci after a few meters you can discover the charming square of the Plebiscite "living room" of the city. In the square you can enjoy the church of San Domenico and The Palazzo Mengoni-Ferretti, the City Museum and the Palace of Government (now the Prefecture). Number 17 is Pizzecolli Bosdari palace headquarters of the Civic Art Gallery. Going by Pizzecolli you will meet the former church of Jesus changed by Luigi Vanvitelli in 1743. In front of the building you will find the Elders.

Very close there is the Roman amphitheater (first century AD) 93 meters long and 74 meters wide, it could hold up to 8,000 spectators. Well worth a visit is the National Archaeological Museum, in Via Ferretti number 6, one of the most famous archaeological museums in Italy it is rich in archaeological finds from excavations conducted exclusively in Marche. The museum is housed in the rooms of the palace a beautiful example of architecture of Ferretti during the 500's. Continuing on Via Perretti, you arrive at the Senate Square where you can admire the Palace of the Senate (1200), the archbishop's palace and the church of SS. And Teresa Pellegrino. From here the road, uphill, takes you to the Cathedral of San Ciriaco and the fourteenth-century bell tower. Adjacent to the Cathedral of San Ciriaco is the former Bishop's ancient monastery which now houses the Diocesan Museum, suggested is a visit to admire the works of religious art, including tapestries from designs by Rubens. From the Duomo you can walk down the scenic Via Giovanni XXIII. Do not forget to visit the Piazza Santa Maria, the church of Santa Maria della Piazza a jewel of Romanesque architecture of ancient temples built in the thirteenth century and, since then, remaine intact. From here you can go down to the harbor and turn right, following the medieval walls will reach the arch of Trajan, built in 115 AD by Apollodorus of Damascus in honor of Trajan. A little further on there is the arch erected by the Clementine Vanvitelli in honor of Pope Clement XII. But inside the port is absolutely recommended a visit to the pentagonal fortress located in the sea in a strategic position, attractive and connected to the mainland by a bridge. 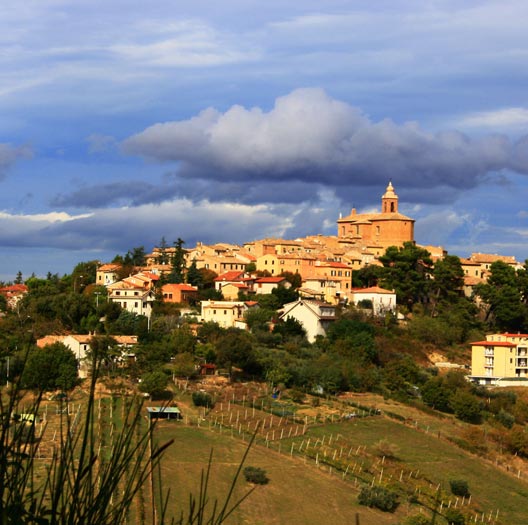 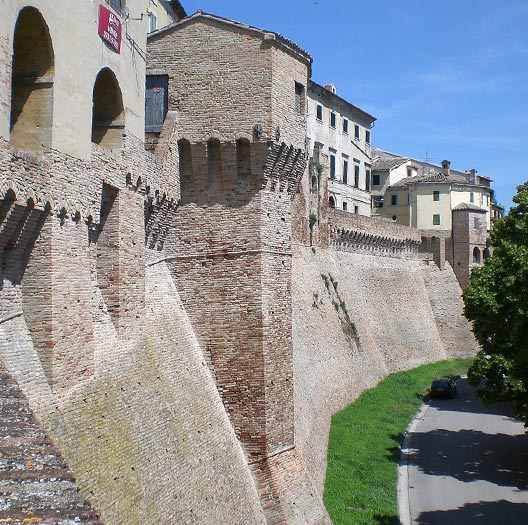 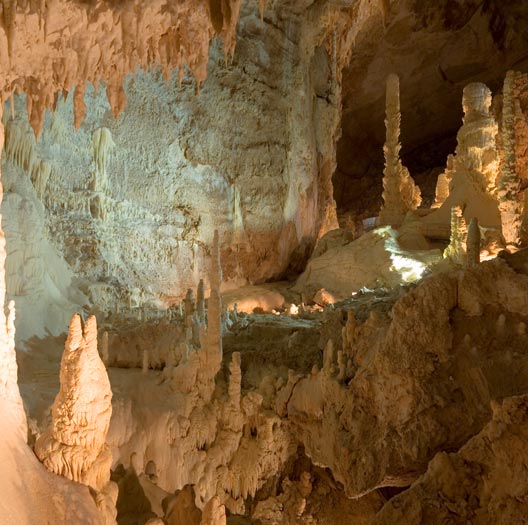 
Genga, a small medieval castle surrounded by nature. It is also a spa, a nature reserve and an area of enormous interest with the famous caves of Frasassi.


Fabriano, "Charter City", the old town still retains its pure flavor of ancient nobility. The fame of Fabriano is due to local paper manufacturers already active in the thirteenth century an to the delicate art form of watermarking. 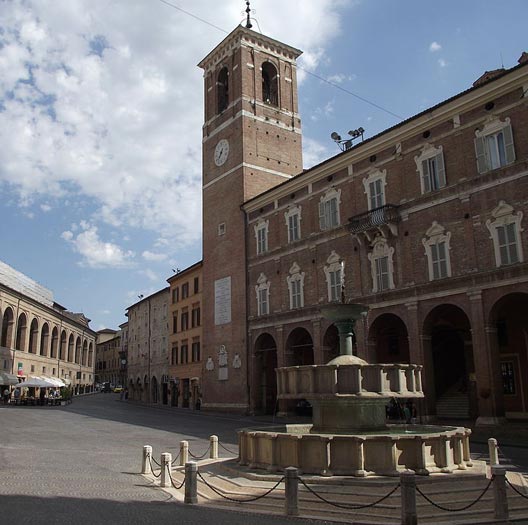 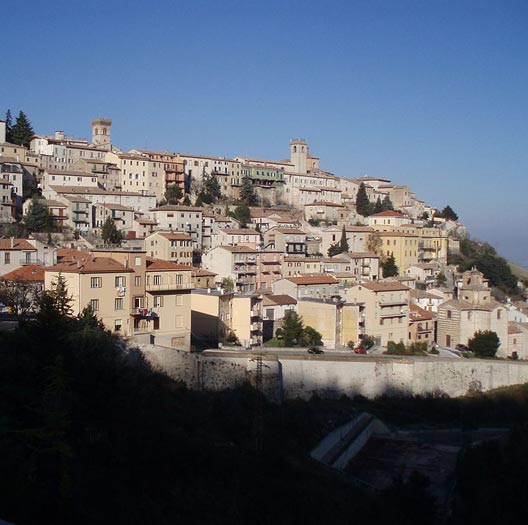 
Arcevia with the collegiate church of Saint-Medard and the majolicas by Luca Signorelli and Andrea and Giovanni Della Robbia.

Corinaldo , the hometown of Maria Goretti, protected by about 1 km of fortifications separated by gates, guard towers, round towers dating back to 1300. 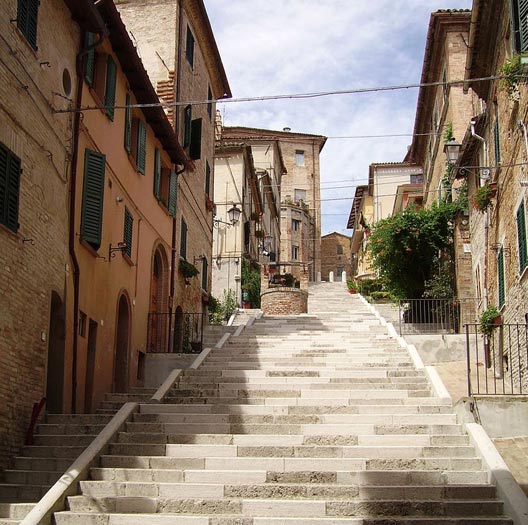 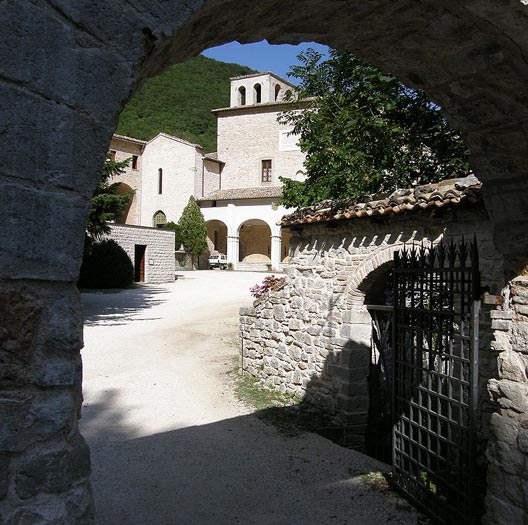 Fonteavallana, a hermitage mentioned by Dante, who stayed there during his wanderings. The interior is full of treasures: the crypt, cloister, the scriptorium and a rich library with over 20,000 volumes.

Cingoli, called "the balcony of Marche" for its location overlooking the Marche region, rich in valuable monuments and works of art. 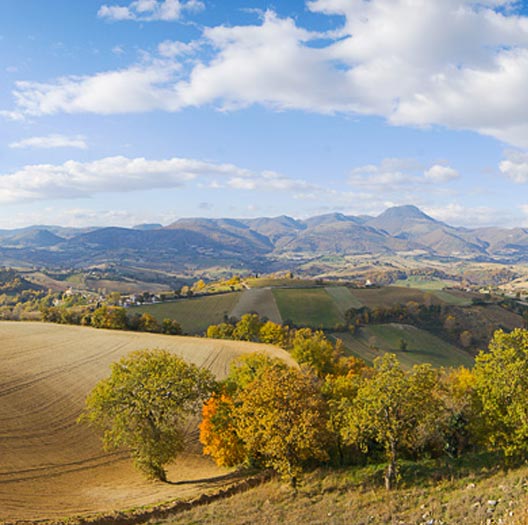 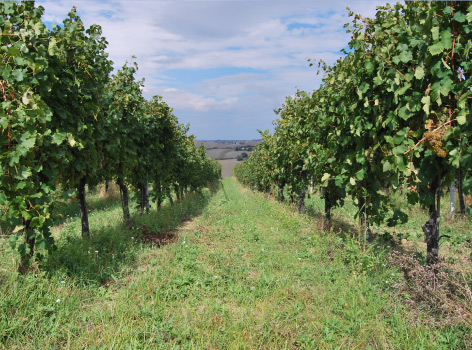 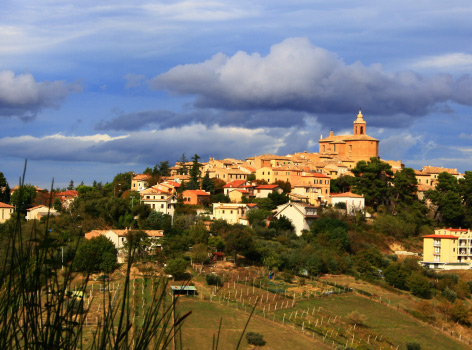